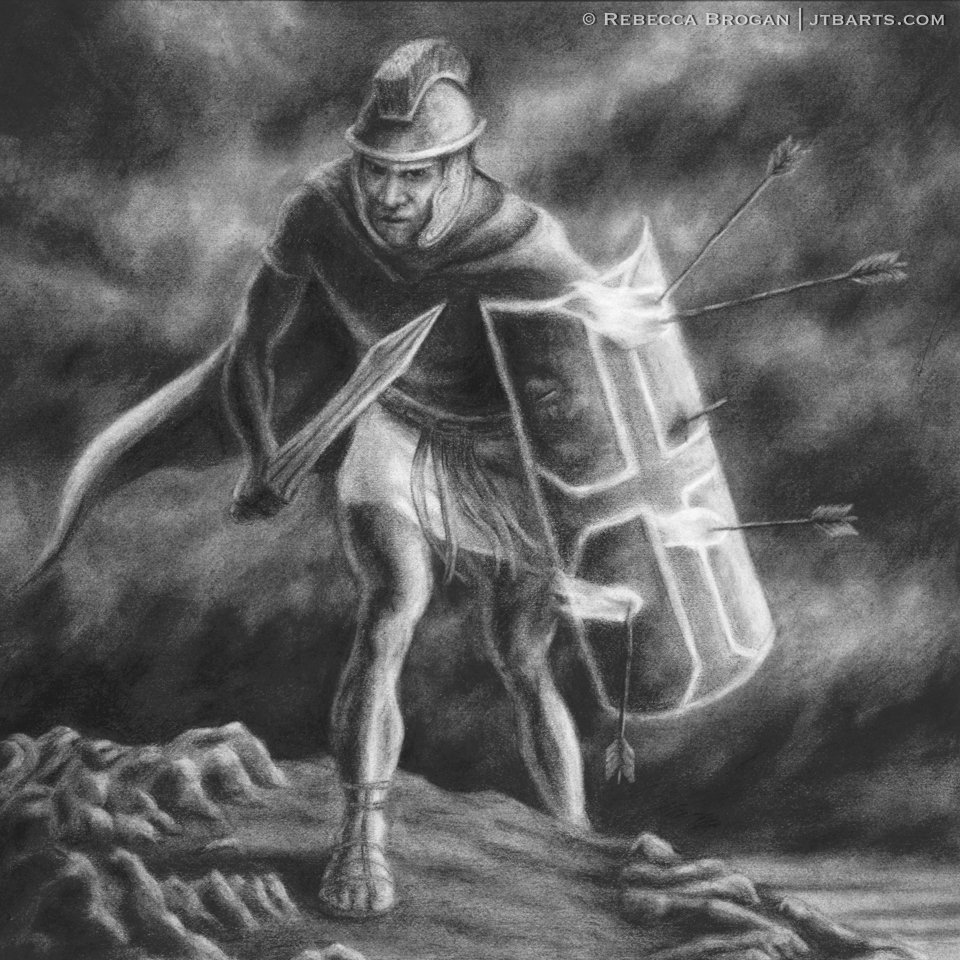 Spiritual warfare frequently comes against us as Christians, and we must always be prepared for the enemy’s attacks by putting on the armor of God listed in Ephesians 6:10-18. This Roman solider is girded with the armor of God. His shield of faith is extinguishing the fiery darts of the evil one. I have hidden a couple things within this artwork which allude to Psalm 91 (see below).

“Finally, be strong in the Lord and in his mighty power. Put on the full armor of God so that you can take your stand against the devil’s schemes. For our struggle is not against flesh and blood, but against the rulers, against the authorities, against the powers of this dark world and against the spiritual forces of evil in the heavenly realms. Therefore put on the full armor of God, so that when the day of evil comes, you may be able to stand your ground, and after you have done everything, to stand. Stand firm then, with the belt of truth buckled around your waist, with the breastplate of righteousness in place, and with your feet fitted with the readiness that comes from the gospel of peace. In addition to all this, take up the shield of faith, with which you can extinguish all the flaming arrows of the evil one. Take the helmet of salvation and the sword of the Spirit, which is the word of God. And pray in the Spirit on all occasions with all kinds of prayers and requests. With this in mind, be alert and always keep on praying for all the saints.” (Ephesians 6:10-18)

Jesus eternally defeated Satan through his death and resurrection 2000 years ago, and he graciously grants his victory to all of those who place their faith in him as Savior. (See “Message“).

However, until Jesus finally manifests his victory at his Second Coming (Revelation 19-20, 1 Corinthians 15:24-28) the devil will contniue to engage in spiritual warfare against us. In order to emerge victorious in these battles, we must clothe ourselves with the armor of God and stand firm against his attacks.

This drawing depicts a Christian clothed in the armor of God, successfully resisting the devil’s attacks and advancing in his walk with God. My husband, Joe, commissioned me to do this drawing for him before we were married. For him, it represents Christian from his favorite book (aside from the Bible), John Bunyan’s classic, The Pilgrim’s Progress.

In this drawing I have alluded to Psalm 91, a famous psalm encouraging us to take refuge in God during times of spiritual attack. Psalm 91:13 says, “You will tread upon the lion and the cobra [symbolic of Satan and demons]; you will trample the great lion and the serpent” (Psalm 91:13).

Based upon this verse I have hidden a lion’s head and 2 snakes in this picture. (Below are hints if you need them)

Hint 2: The profile of a lion’s head (with an open mouth) is on the left and the snakes are on the right (fangs are visible).