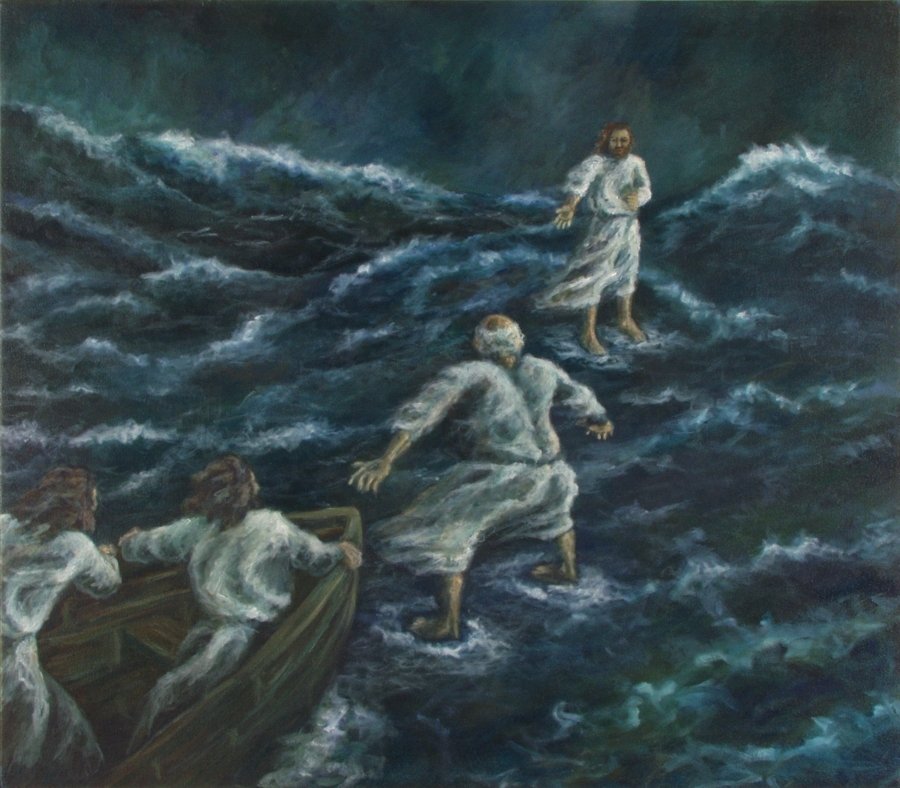 PrevPrevious12) How Could A Loving God Send People To Hell?
Next14) I’ve Done so Many Bad Things, Could God Ever Forgive Me and Accept Me?Next

“Jesus did many other miraculous signs in the presence of his disciples, which are not recorded in this book. But these are written that you may believe that Jesus is the Christ, the Son of God, and that by believing you may have life in his name.” (John 20:30-31)

“Jesus Christ is the same yesterday and today and forever.” (Hebrews 13:8)

“Jesus went throughout Galilee, teaching in their synagogues, preaching the good news of the kingdom, and healing every disease and sickness among the people. News about him spread all over Syria, and people brought to him all who were ill with various diseases, those suffering severe pain, the demon-possessed, those having seizures, and the paralyzed, and he healed them. Large crowds from Galilee, the Decapolis, Jerusalem, Judea and the region across the Jordan followed him.” (Matthew 4:23-25)

Clearly, miracles are an integral part of Biblical Christianity. Thus we are faced with the question: Were they truly genuine, or were they legends?

I would start with the logical argument: If a supernatural God exists, then it is reasonable to accept that he can and does perform  supernatural works.

I would also appeal to the truthfulness and accuracy of the Scriptures in all other areas as a basis to believe that it is also telling the truth in its accounts of miracles. The Bible is a historical account (and was originally written and received as such), and much of its history, people, cultures, places, geography and events have been validated as being historically accurate by numerous extra-Biblical historical sources and archaeological discoveries. (This issue is covered under 6) Is There Any Historical or Archaeological Evidence That Validates The Bible?)

Fascinatingly, did you know that there are extra-Biblical (outside of the Bible) historical accounts of Jesus from that ancient time period which record that he did miracles? Even more fascinating, did you know that even the opponents of Jesus who wrote about him did not deny the fact that he did miracles. They just tried to explain them away as magic tricks or the power of the devil.

Furthermore, the Bible, particularly the New Testament, which chronicles the life of Jesus, is based upon eyewitness accounts and was originally written within the generation of the tens of thousands of people who knew Jesus and experienced his miracles first hand. In addition, archaeological discoveries have proven that the Bible we read today has been accurately translated and has not been corrupted by men or “lost in the translations” over the centuries. (This issue is covered under 5) Has The Bible Been Lost in Translations?)

I would also appeal to the prophetic nature of the Scriptures as a powerful demonstration of the existence of God. About one third of the Bible is prophetic and has accurately predicted, sometimes hundreds and even thousands of years in advance, hundreds of different events such as the rise and fall of the Greek and Roman empires, Alexander the Great and the reformation of Israel as a nation in 1948. (This issue is covered 8) Can Bible Prophecy Be Proven?).

Lastly, I would appeal to the fact that God continues to perform miracles today. We should expect God to do miracles to today if he is real, for the Bible says, “Jesus Christ is the same yesterday and today and forever” (Hebrews 13:8). He was a miracle worker 2000 years ago, and he is the same Jesus today.

Please see Salvation Testimonies to read numerous firsthand accounts from people from all around the world who have experienced God’s miracles in their lives.

It’s wonderful to hear about all the miracles Jesus has done and continues to do to this day. However, I would like to take the time now to include some miraculous testimonies that are a lot closer to home. My husband, friends of mine and I have all experienced medically documented and confirmed healings through the power of prayer in Jesus’ name. Below are our firsthand accounts of our miraculous experiences. I will begin with my own:

While I was pregnant with my daughter I injured my wrist. After my daughter was born this injury was greatly exacerbated by constantly holding and carrying her. I went to see an upper limb physiotherapist who diagnosed it as “severe tendonitis”. My tendons were very inflamed, the mobility of my wrist was greatly hindered (the physio could only move it 10 degrees) and the pain was so bad that it kept me awake at nights (even though my infant daughter was sleeping!) I had to wear a splint at all times. Unfortunately, however, physiotherapy hardly made a difference because I had to constantly use my wrist to care for my baby (and this only got worse the heavier and more mobile she got).

I suffered with this condition for a year until a lovely Christian woman came and prayed for my healing. Although I wasn’t immediately healed the instant she finished her prayer, in less than 24 hours ALL of the pain had completely disappeared and the inflammation had decreased by about 75% (I had had a big, noticeable bump on my tendon). Within a week the inflammation was completely gone. From that day after the prayer onwards (through to today) I miraculously have had NO pain, FULL mobility and the FULL function of my wrist again. It healed at a miraculous rate, and it’s as if I had never injured it. Several years onwards I’ve never had a single problem with it since! Praise the Lord! At a later visit, my doctor was significantly impressed and speechless to see my wrist was indeed miraculously healed. (Though this might seem like a “small” miracle to some, a wrist injury like this was a tremendous impediment to a new mother who constantly depended on it to care for her baby.)

At the age of 23 I had a dramatic healing. I was troubled with back pain for four years because my left leg was 10 mm shorter than the right. I had seen many doctors, and a surgeon recommended a packed shoe or surgery to remove a section of my femur (upper leg bone) to reduce the length of my longer leg. I lived with this problem every day.

Then one night the church I had started to attend in Dundee, Scotland, had a healing meeting, which I had never heard of before. The speaker, Ian Andrews, invited all sick people to come forward for prayer, and so I jumped forward thinking, “Well, I’m sick!”

So I went up and he asked me what was wrong with me, and I explained that I had back trouble. Then he said, “You’ve got one leg shorter than the other.” I said, “Yes”, in surprise because I hadn’t told him that. I wasn’t prepared or expectant of the event to unfold. Ian sat me down and then asked me if I wanted to be taller or shorter. I said in puzzlement, “Well, taller”. So he held my feet out straight in his hands, which clearly showed the uneven leg length. Then he commanded my left leg to grow in the name of Jesus.

Instantly, I could feel a “growing sensation” in the middle of my left shin. This threw me back in my seat, and my body straightened out for a brief moment.  My left leg immediately grew out by the full amount. There was a small crowd around me who witnessed this occurrence, and they gasped see my leg grow instantaneously in front of their eyes. (In later years a physio said to me during an examination, “Mr. Brogan, you have a perfect skeleton”.)

Physical Healing in a Tasmania Prison:

[I volunteer with Prison Fellowship, Tasmania, Australia, where I work with adult inmates. One of our other Prison Fellowship Tasmania volunteers, who works in the juvenile detention centre, was used by God to perform an amazing miracle. Please read the story online.]

Consuelo (a Christian friend of mine):

My name is Consuelo and I live in Melbourne, Australia. I didn’t believe in Jesus because I looked at the man made religious institutions and thought that was Christianity. I decided to read the Bible to show my Christian friend its errors, but the truth of the Word of God caused me to believe. The man made institutions don’t represent God, but we have the Bible to read for ourselves to learn about Jesus.

I understand the freedom that comes from knowing Jesus and want to share this with others.

Before I became a Christian, my Christian friend and I visited a quiet place on a mountain. She said to see if God spoke to me, and we were silent.

I thought this was silly but heard “Be still,” followed by something else which I didn’t catch.  My friend asked me if I heard something but I said no because I thought I had thought it up. She said that God said to her “Be still, and know that I am God”. I was surprised but didn’t say anything because I didn’t understand what had happened. Years later, when I became a Christian, I discovered this was a scripture from the Bible:

When I first become a Christian, I had a real desire to learn about my new faith and was blessed to understand early in my walk that all believers are called to share the good news and to pray for others. I had very good teachers who showed me practically what this meant, and I went with them to reach out to people who didn’t know the love and power of God.

I walked into a shop one day and there was a young woman with a cast and sling on her arm.  She told me she had broken it while playing volleyball. I asked her how much movement she had. She couldn’t get her arm anywhere close to shoulder height and she was wincing with pain when trying. I asked if I could pray and she said yes. I prayed in the name of Jesus for her arm to be healed and asked her to move it. The pain and movement were the same as before.

I prayed again and she was then able to move the arm up and down to full movement and had no pain. She smiled broadly as she waved her arm up and down and said to the cashier close by, “I’m healed!”.

The cashier said, “Praise the Lord!”.

Yes, praise God for His goodness and power. God calls us to pray for others in the name of Jesus in faith. Nothing is impossible for God!

On another occasion, a friend and I met a homeless man who had badly injured his knee and was limping and in pain. We prayed for his knee to be healed in the name of Jesus but it seemed he was experiencing more pain and said we could stop praying. After saying good bye we walked a short distance away and prayed again for his healing as we felt we had been interrupted.

About a week later I saw the man again and he was so happy. He said he had woken up completely healed the next day and had not had any more issues. He was so encouraged by his healing that he contacted a family member who he hadn’t spoken with for some time and they were able to meet.  Not only did God restore his knee, but God also restored his relationship!