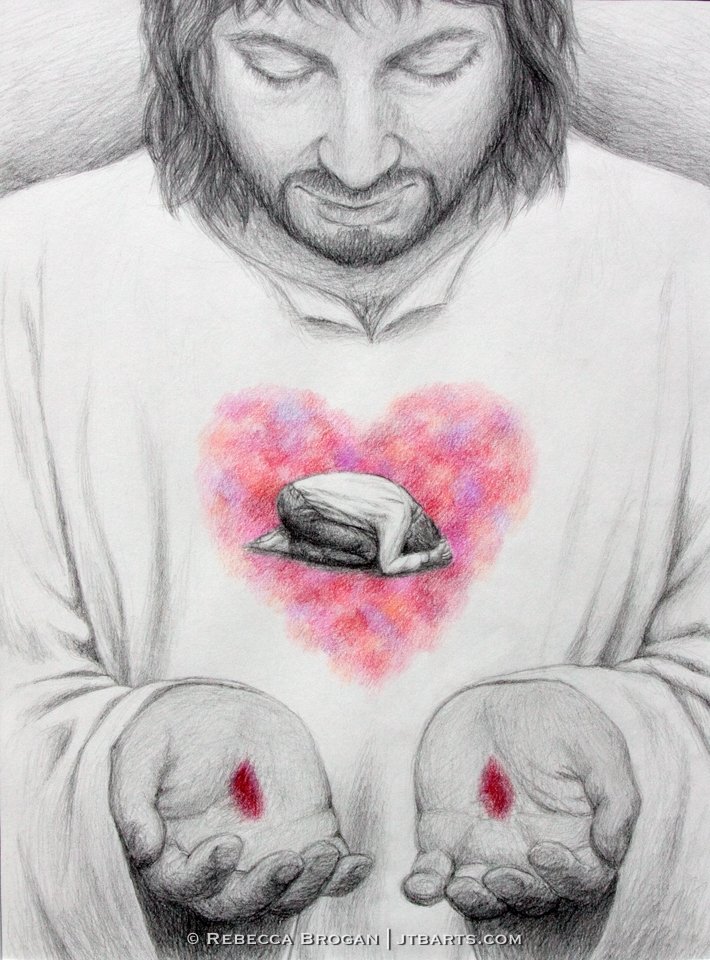 A Man After God’s Own Heart

PrevPreviousHope After Failure
NextAbove All Else, Guard Your Heart, For it is The Wellspring of Life (Proverbs 4:23)Next

“But now your kingdom will not endure; the LORD has sought out a man after his own heart and appointed him leader of his people, because you have not kept the LORD’s command.” (1 Samuel 13:14)

“After removing Saul, he made David their king. He testified concerning him: ‘I have found David son of Jesse a man after my own heart; he will do everything I want him to do.’” (Acts 13:22)

This drawing depicts a man who, like King David, loves God more than anyone and anything else. By the power and grace of God, and out of his great love for the Lord, this man has laid down his life for him.

Everything this man is and all that he has has  been crucified so that his only desire is the Lord himself and the Lord’s heart (Luke 14:25-35, Galatians 2:20). All of the man’s possessions, desires, dreams and plans are dead and buried– irrevocably –they will never be resurrected. In their place rises a new, resurrected life of God where he is so selflessly and intently focused on the Lord and the Lord’s desires that he unwittingly finds himself in the center of God’s heart and will.

The heart of the Lord Jesus is deeply touched by this, and he treasures the love of such men and women knowing that, “Greater love has no one than this, that he lay down his life for his friends” (John 15:13).

While it is the Holy Spirit who empowers us to make this sacrifice, I believe it is the revelation of God’s love for us which inspires us to lay down our lives, for it is the only thing strong and persuasive enough to cause us to ‘die’ for him.

“Place me like a seal over your heart, like a seal on your arm; for love is as strong as death, its jealousy unyielding as the grave. It burns like a blazing fire, like a mighty flame. Many waters cannot quench love; rivers cannot wash it away” (Song of Songs 8:6-7).

The supreme demonstration of God’s love for us was when Jesus Christ laid down his own life for us on the cross.

“…God has poured out his love into our hearts by the Holy Spirit, whom he has given us. You see, at just the right time, when we were still powerless, Christ died for the ungodly. Very rarely will anyone die for a righteous man, though for a good man someone might possibly dare to die. But God demonstrates his own love for us in this: While we were still sinners, Christ died for us.” (Romans 5:5-8)

In my drawing, Jesus’ hands gently display the scars of the cross, a perpetual reminder of his great love for this man. Likewise, as the remembrance of his scars are continually set before this man’s eyes, he finds the strength to daily die to himself that he may live for the will of God alone. “Therefore, since Christ suffered in his body, arm yourselves also with the same attitude, because he who has suffered in his body is done with sin. As a result, he does not live the rest of his earthly life for evil human desires, but rather for the will of God” (1 Peter 4:1-2).

Jesus also gently cups his hands and tenderly holds the man close to his heart (Isaiah 40:11, Psalm 148:14), for his sacrifice is a very precious thing.

“For the eyes of the LORD range throughout the earth to strengthen those whose hearts are fully committed to him.” (2 Chronicles 16:9)

Sacrifice: The Fragrance of Worship (Praise and Worship Series)

The Joy of The Redeemed: King David Dancing (Praise and Worship Series)