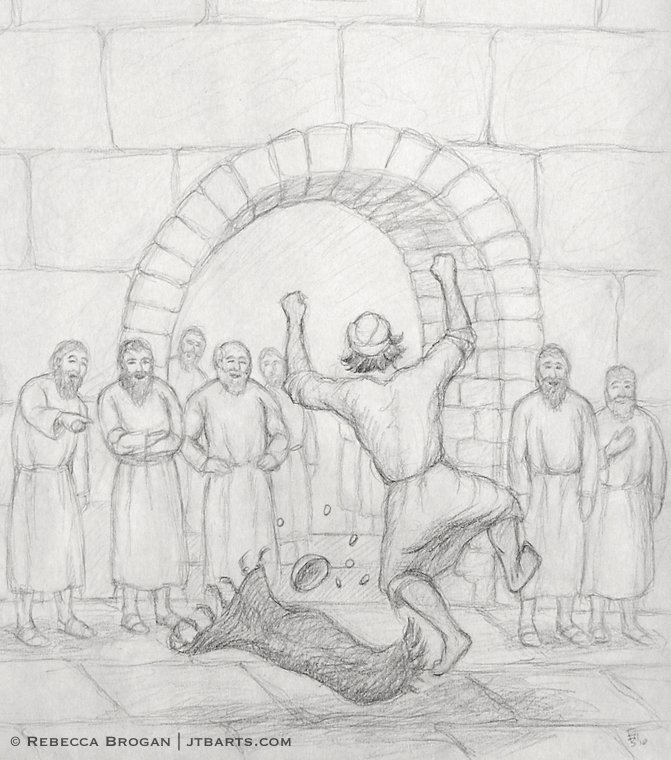 Peter, John and The Healing of The Crippled Beggar (Acts 3)

CHRISTIAN FINE ART GALLERY > EVENTS OF THE BIBLE SERIES > Peter, John and The Healing of The Crippled Beggar (Acts 3)

This drawing is an image that came into my mind when the Lord miraculously healed me of a bad sickness. I felt just like the healed cripple in this story and jumped for joy over my healing, just as he is in this drawing.

“One day Peter and John were going up to the temple at the time of prayer–at three in the afternoon. Now a man crippled from birth was being carried to the temple gate called Beautiful, where he was put every day to beg from those going into the temple courts. When he saw Peter and John about to enter, he asked them for money. Peter looked straight at him, as did John. Then Peter said, “Look at us!’ So the man gave them his attention, expecting to get something from them.

“Then Peter said, ‘Silver or gold I do not have, but what I have I give you. In the name of Jesus Christ of Nazareth, walk. Taking him by the right hand, he helped him up, and instantly the man’s feet and ankles became strong. He jumped to his feet and began to walk. Then he went with them into the temple courts, walking and jumping, and praising God. When all the people saw him walking and praising God, they recognized him as the same man who used to sit begging at the temple gate called Beautiful, and they were filled with wonder and amazement at what had happened to him.

“While the beggar held on to Peter and John, all the people were astonished and came running to them in the place called Solomon’s Colonnade. When Peter saw this, he said to them: ‘Men of Israel, why does this surprise you? Why do you stare at us as if by our own power or godliness we had made this man walk?…By faith in the name of Jesus, this man whom you see and know was made strong. It is Jesus’ name and the faith that comes through him that has given this complete healing to him, as you can all see.” (Acts 3:1-12, 16)