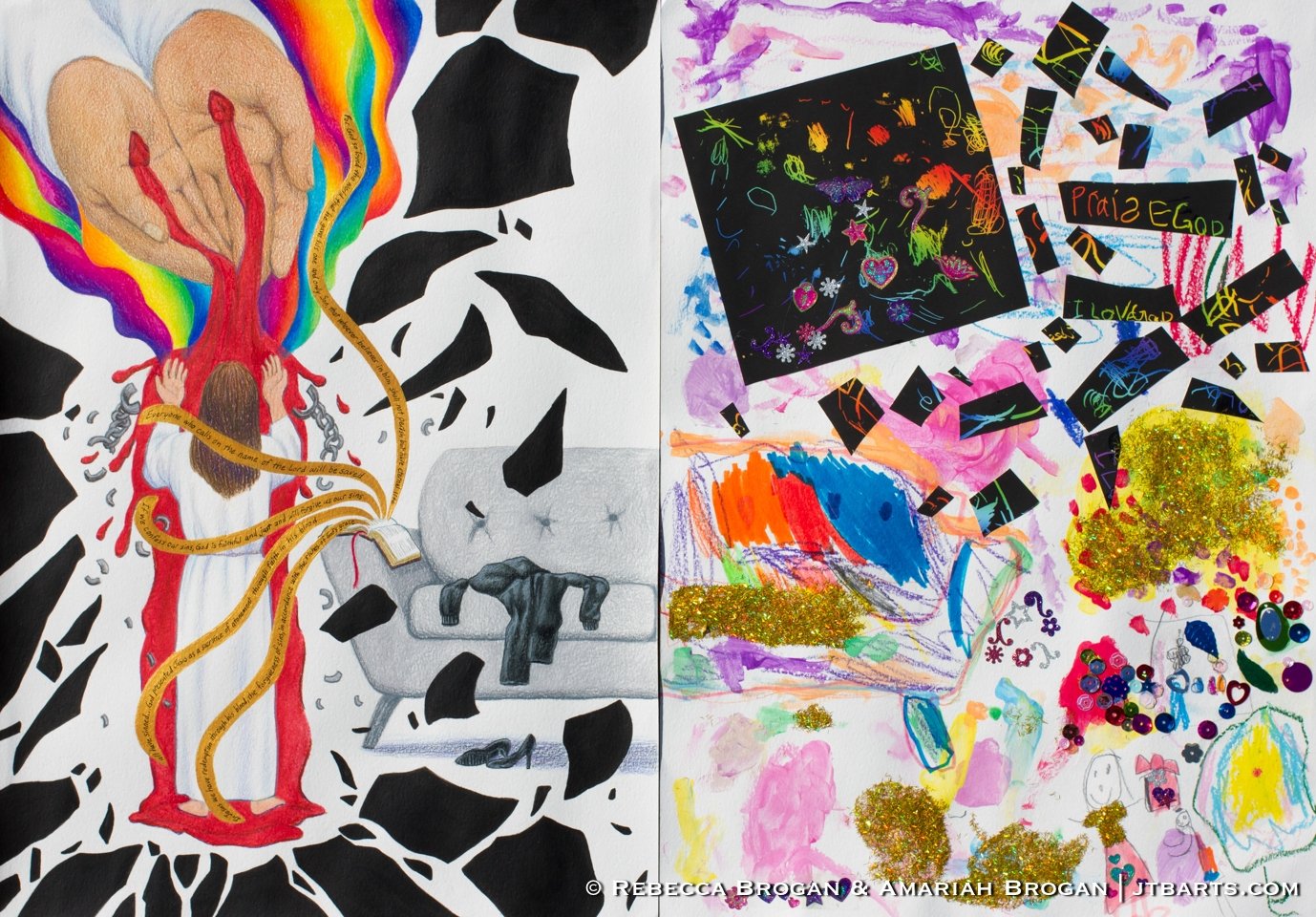 My 5 yr old daughter, Amariah, and I collaborated on this drawing for an exhibition called “Creative Mirror”. Though we were not allowed to see each others’ artwork, the spiritual continuity between the two halves is truly astounding. Its message of redemption in Christ is clear.

This drawing was done specifically for an exhibition called “Creative Mirror”, hosted in both Sydney, Australia, and New Orleans, USA.

My five year old daughter, Amariah, and I were each supposed to complete half of a drawing, but we were not allowed to look at each others’ artwork or speak about it until they were finished. There were no limitations on our creativity. The only requirement was that each of us had to incorporate half of a couch, which would fit together seamlessly when the two halves of the finished drawing were finally put together.

As Christian artists, our foremost desire is to draw only what God directs us to. Therefore we were both in agreement to begin our “Creative Mirror Experiment” in prayer. We asked God to inspire us and to give us a coherent piece of artwork that clearly communicated the message he wanted us to speak.

What you see is the picture that came to me in prayer (on the left side of the drawing…which is probably already obvious to you).

Seeing that the previous time Amariah was allowed to have free, unsupervised reign over the arts and crafts materials resulted in multiple pairs of scissor blades being glued together, I decided to supervise but not intervene in her art-making process for this project. I set out all of the art materials we had and offered to get even more if she requested them. At the sight of them she squealed with delight and dove straight in. For six straight hours (aside from a brief lunch break) she worked on her artwork. She had never had this long of a sustained attention span on anything before.

I watched in sheer amazement as her picture unfolded. I was dumbfounded at how consistent her half of the drawing was with mine (although she had not seen mine yet). Visually and thematically they fit together perfectly. A beautiful narrative of a woman of childlike faith trusting in God for salvation and having her life transformed came forth. I knew it was the hand of God.

My half of the drawing illustrates a woman who had been reading the Bible. As she read and put her faith in the Word of God, its truth began to set her free (John 8:32). She realized that she was a sinner and needed to be forgiven by God. She turned to him in repentance and faith, trusting that Jesus had died to pay the punishment for her sins. In response to her repentance and faith, Jesus pours out his atoning blood upon her, which washes her clean of all her sins and gives her new, eternal life. There are five Bible verses wrapping around her, which were key to setting her free from sin and death:

“For God so loved the world that he gave his one and only Son, that whoever believes in him shall not perish but have eternal life.” (John 3:16)

“If we confess our sins, he [God] is faithful and just and will forgive us our sins and purify us from all unrighteousness.” (1 John 1:9)

“In him [Jesus] we have redemption through his blood, the forgiveness of sins, in accordance with the riches of God’s grace…” (Ephesians 1:7)

Here is Amariah’s Artist’s Statement in her own words:

Jesus is the one, true God. If you believe in him, you will go to heaven. God forgives your sins when you say sorry. Now you know God can do all things. Give, and it will be given unto you. One of the girls is giving the box of clothes and toys and some special stuff to the poor girl.