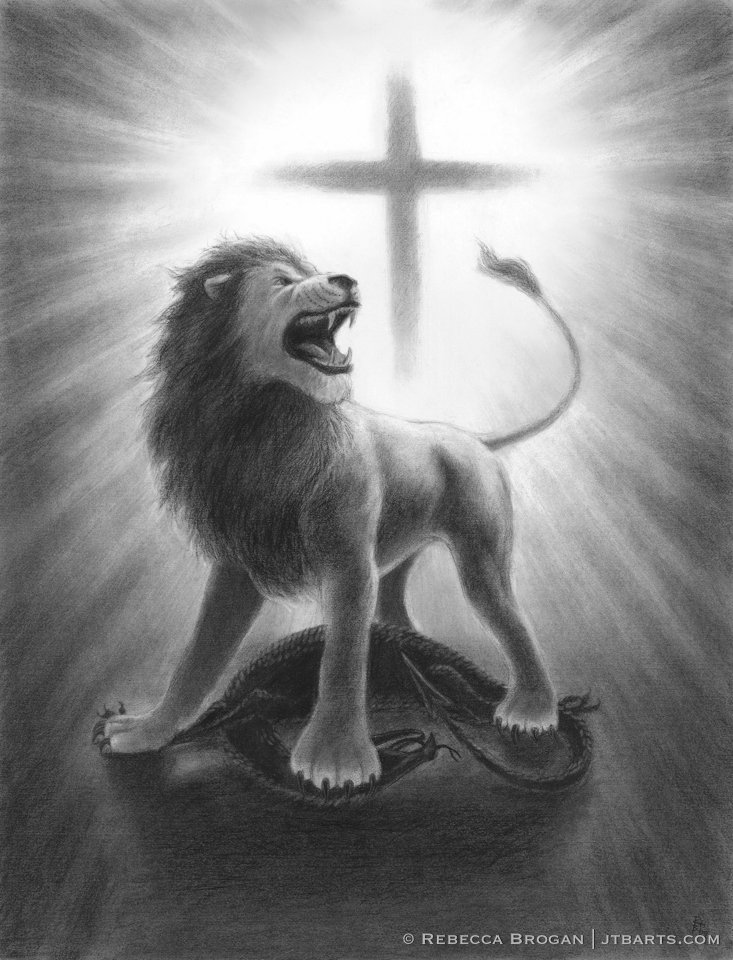 The Lion of Judah Triumphant Over The Dragon

PrevPreviousThe Lion and The Lamb
NextThe Lion of Judah RoaringNext

“But thanks be to God! He gives us the victory through our Lord Jesus Christ!” (1 Corinthians 15:57)

This drawing of the Lion of Judah roaring was inspired by a dream the Lord gave me a dream about spiritual warfare.

In the final part of the dream, the Lord was with me, I was clothed in the armor of God (Ephesians 6:10-18), a sword was placed in my hand and an evil spirit was unleashed against me. I fought with all my might, and I fought well. However, I could not get the victory over the demon. He seemed to have strength that equaled my own, and I could not overpower him.

I reasoned that if I swung my sword harder, I could conquer him, but for all my efforts, I could just not defeat him. The longer I fought, the more frustrated I became. In my heart I began to cry out to God, “Why am I not getting the victory? Why can’t I overpower him? Why won’t you just defeat him for me, God?”

Then all of a sudden God gave me a strong revelation. I stopped fighting, looked at the demon and said:

“I don’t have to FIGHT you because Jesus has ALREADY DEFEATED you.”

Instantly, the demon disappeared and glorious light burst forth. Golden streamers and a sense of victory and celebration filled the air.

This was one of the greatest revelations the Lord has given me in regards to spiritual warfare. It revolutionized the way I perceived fighting against the Enemy, and definitely, how the battle is won in our practical experience.

Jesus ALREADY won the victory over sin, death and Satan on the cross (Ephesians 1:18-22 and 1 John 3:8) two-thousand years ago. To manifest that victory in our experience as Christians is simply to believe that Satan is what he actually is–ALREADY defeated–and stand fast in believing it. God has granted us Christ’s victory and Christ’s authority over Satan, but we need to exercise faith concerning that victory and authority (Luke 10:19-20). Also, very importantly, in order to remove footholds of the enemy in our lives (Ephesians 4:27), we must be in a place of repentance and submission to God:

“Submit yourselves, then, to God. Resist the devil, and he will flee from you. Come near to God and he will come near to you. Wash your hands, you sinners, and purify your hearts, you double-minded. Grieve, mourn and wail. Change your laughter to mourning and your joy to gloom. Humble yourselves before the Lord, and he will lift you up.” (James 4:7-10)

Much of our Christian conception of spiritual warfare these days is based on the world’s way of warfare–more power, more fighting, more strength. This is the way I initially set out to fight the demon in my dream. However, this will only end in our exhaustion and defeat because we are relying on ourselves and fighting the battle in our own strength. God clearly says, “For the battle is not yours, but God’s” (2 Chronicles 20:15).

The Bible tells us, “For though we live in the world, we do not wage war as the world does. The weapons we fight with are not the weapons of the world. On the contrary, they have divine power to demolish strongholds. We demolish arguments and every pretension that sets itself up against the knowledge of God, and we take captive every thought to make it obedient to Christ” (2 Corinthians 10:3-5).

In regards to overcoming sin our lives, it is this same principle of “faith in the truth” which manifests victory in our experience. (We are ALREADY FREE from sin because Jesus has set us free. See Romans 6:6, Romans 6:17, John 8:34-36, and John 8:32).

In times past, I had struggled terribly against habitual sin in my life. However, once God gave me revelation of the truth (through the Scriptures mentioned above), victory over my bondage to habitual sin was suddenly broken, just as that demon suddenly disappeared the moment I placed “faith in the truth”.

After years of walking in freedom over a particular habitual sin, I strangely began to be tempted with it again. For a brief time, I even fell back into it. It was a bizarre experience, as those horrible, old temptations came against me once again. They caught me off guard during a time when I was earnestly seeking God and was not careful to simultaneously be sober and alert against Satan’s attacks (1 Peter 5:8-9).

As I began to fall back into that old pattern of sin and condemnation, I also reverted back to my old, struggling, defeated thinking patterns. Soon Satan began to say to me, “See, you aren’t really free from this sin. You may have experienced a period of freedom there for awhile, but it was only short-lived. You are still that same old person with that same old bondage, not the new, set-free person you imagined yourself to be. See, you don’t really have any power or control or victory over this sin. I still have the upper hand over you in this area. I have the victory over you and not the other way around. You are still a slave to this sin.”

Because I had let go of the truth, “We live by faith, not by sight” (2 Corinthians 5:7), and had foolishly begun to believe that my experience of bondage, rather than the Word of God (John 17:17) was truth, I started to dread the words Satan was whispering into my ears. Logically, I knew they weren’t true, but so much of my experience seemed to argue that they were!

After some weeks of this, I was praying, and suddenly I realized just how far I had wandered away from the truth of God’s Word! Once again God graciously gave me the revelation of victory. I realized I did not have to get free of this habitual sin all over again because I was ALREADY free! I did not have to fight with Satan because Jesus has ALREADY defeated him!

Immediately, after being reminded of this truth, both the sin and Satan’s attacks were experientially conquered in my life once again! Praise the Lord!

The image of this drawing came to my mind at this time.

That ancient dragon, Satan (Revelation 12:9), may thrash around and spurt out all sorts of lies in efforts to derail God’s children. However, it will not be long before the LORD Almighty will throw him into the lake of fire to be tormented for all eternity (Revelation 20:10). Two-thousand years ago, when Christ, the triumphant Lion of Judah (Revelation 5:5) died on the cross and rose again, he crushed Satan’s head and conquered him for all eternity (Genesis 3:15). And Satan’s head is STILL there, crushed under the foot of our glorious, triumphant Jesus Christ, and he graciously extends his victory to us.

Can you hear the Lion of Judah roaring his victory in your life?!

The Weapons of Our Warfare (Spiritual Victory, Freedom, Healing Series)