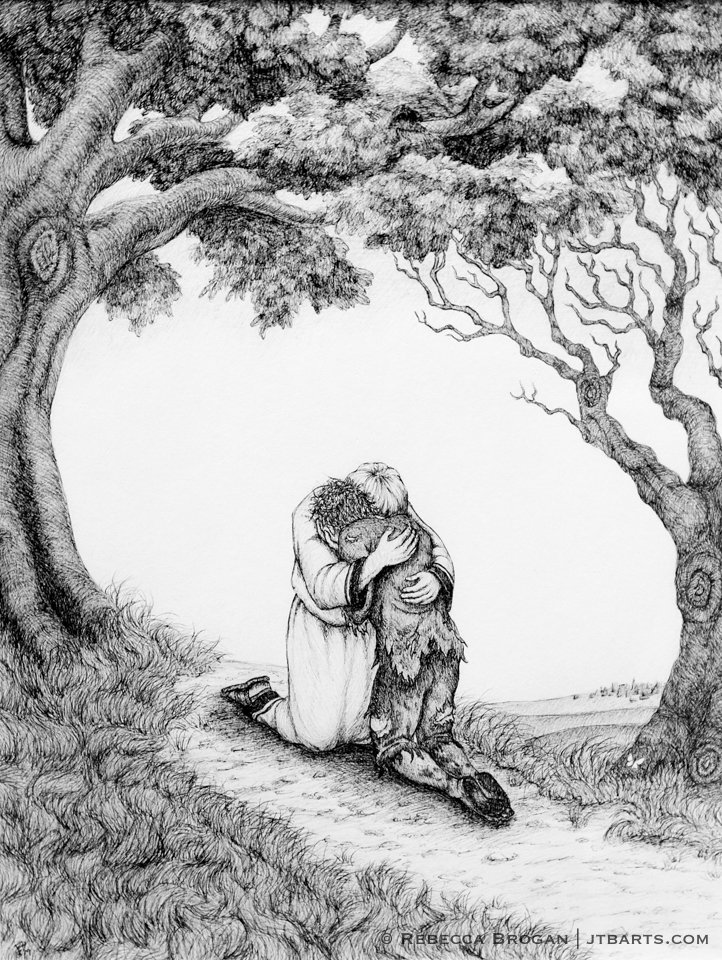 PrevPreviousWalk By Faith (Jesus and Peter Walking on Water) (Matthew 14:22-33))
NextThe Parable of The Lost SheepNext

Jesus told the parable of the prodigal son to demonstrate how much God longs for us sinners to turn from our sins and be reconciled to him. The story emphasizes the abounding love God has for each one of us and the overflowing grace and mercy he longs to show us and that is awaiting us when we turn back to him regardless of how bad we have been and no matter what we have done.

God loves us so much that he sent his Son, Jesus, to take the full punishment for OUR sins in order to make this forgiveness and reconciliation with God possible (2 Corinthians 5:17-2, Romans 3:20-26, Romans 8:1-4).

(See “Message” for how to be reconciled to God.)

One thing in particular that encourages me about this parable of the prodigal son is the son’s trust in his father’s nature. When he was at rock-bottom feeding the pigs, he knew his father well enough to realize he may be accepted back as a hired hand and not be disowned or rejected in anger. Though the son knew his own unworthiness as a son, yet he also knew that returning to his father in deep, sincere repentance was the only option that would save him from his squalid predicament…and he was received more fully than he ever could have imagined. How great is the Father’s love for us! Father, give us the grace to believe and to trust in your exceedingly merciful heart for us! “Now the tax collectors and “sinners” were all gathering around to hear him [Jesus]. But the Pharisees and the teachers of the law muttered, ‘This man welcomes sinners and eats with them.” Then Jesus told them this parable: ‘There was a man who had two sons. The younger one said to his father, ‘Father, give me my share of the estate.’ So he divided his property between them. Not long after that, the younger son got together all he had, set off for a distant country and there squandered his wealth in wild living. After he had spent everything, there was a severe famine in that whole country, and he began to be in need. So he went and hired himself out to a citizen of that country, who sent him to his fields to feed pigs. He longed to fill his stomach with the pods that the pigs were eating, but no one gave him anything. When he came to his senses, he said, ‘How many of my father’s hired men have food to spare, and here I am starving to death! I will set out and go back to my father and say to him: Father, I have sinned against heaven and against you. I am no longer worthy to be called your son; make me like one of your hired men.’ So he got up and went to his father. But while he was still a long way off, his father saw him and was filled with compassion for him; he ran to his son, threw his arms around him and kissed him. The son said to him, ‘Father, I have sinned against heaven and against you. I am no longer worthy to be called your son. But the father said to his servants, ‘Quick! Bring the best robe and put it on him. Put a ring on his finger and sandals on his feet. Bring the fattened calf and kill it. Let’s have a feast and celebrate. For this son of mine was dead and is alive again; he was lost and is found. So they began to celebrate. Meanwhile, the older son was in the field. When he came near the house, he heard music and dancing. So he called one of the servants and asked him what was going on. ‘Your brother has come,’ he replied, ‘and your father has killed the fattened calf because he has him back safe and sound.’ The older brother became angry and refused to go in. So his father went out and pleaded with him. But he answered his father, ‘Look! All these years I’ve been slaving for you and never disobeyed your orders. Yet you never gave me even a young goat so I could celebrate with my friends. But when this son of yours who has squandered your property with prostitutes comes home, you kill the fattened calf for him! ‘My son,’ the father said, ‘you are always with me, and everything I have is yours. But we had to celebrate and be glad, because this brother of yours was dead and is alive again; he was lost and is found.’” (Luke 15:1-3, 11-32) Listen to a powerful song about The Prodigal Son: “When God Ran”, By Phillips, Craig and Dean Another powerful song about the prodigal returning: “Into The Light”, By Laura Woodley-Osman For the fathers and mothers who are praying for their prodigal sons and daughters to return, here is an encouraging testimony from a returned prodigal (posted with permission from www.frangipane.org): [This message was written by Francis’ daughter Joy in 1995. We felt that this would be a special encouragement to those who are standing in prayer for your children. Currently, Joy and her husband, Steve, have two children. She is a successful businesswoman who continues to be an immense blessing to her parents.] Your Children Will Return By Joy Frangipane Marion No one can tell me that fathers and daughters can’t have close relationships, or even become best friends. People are almost envious of the love my dad and I share. The only time we argue is about who loves who the most. But our relationship was not always this warm. There was a time when I felt I had lost my ability to love my father. I was a teenage Christian in a public high school. My Christian background made me different. I was new, craving acceptance. My father’s rules seemed to be the source of my rejections. Fueled by my insecurities, in my eyes my dad became the root of my problems. While I set an adequate standard and struggled to live by it, he was strict. I was angry because he refused to back down from the standard he knew was right. He refused to appeal to my ignorance in order to keep my acceptance… Continue reading: Your Children Will Return See also: Unworthy, But That’s The Grace of God (Believer’s Road Series) Where Sin Abounds, Grace Abounds All The More (Believer’s Road Series) Empty Hands (Believer’s Road Series)